Objection to Front Line Article “Life is not a Beach”

An article has been published in your Esteemed Magazine wherein “Life is not a beach – Mining for beach sand mineral poses a threat to the economic and social fabric of fishing village along Tamilnadu” is alleged to have been reported by your reporter Mr. Ilangovan Rajasekaran with an molafide intention and oblique motive contrary to the truth and reality your reality. Your reporter Mr. Ilangovan Rajasekaran has mentioned a name of a person Mr.Santiyago who had been affected by poor fishing and the catches are becoming rare.

Such publication of baseless article without any proof or evidence doesn’t speak well of your journalistic tradition built over these years to violating all the basic tenets expected of a well reputed magazine. We are illustrating with few examples culled out from your article to prove as to how the article is without any basic truth.

Your reporter Mr. Inangovan Rajasekaran has mentioned that the outside force have alienated the sea from the Fishermen and caused division among the fishermen. Before starting an article Mr. Ilangovan Rajasekaran should know the history of Fishermen community. Initially prior to India’s freedom, British and Portuguese Bishops were engaged the fisherman community to change the Christianity. After independence these all merged and comes under the control of one Bishop. But, the village people did not merge and they have enmity among them.

Your reporter has mentioned a name of a person Shri. Santiago, 73 from Periathalai village and neighbouring village Padugapattu. M/s. VV Mineral is not having any mining lease or carrying out any mining operation in the past or present in any of Periathalai village (or) Padugapattu village. In the above villages Mr. Daya Devadoss is only having mining leases in the name of M/S Indian Garnet Sand Company (IGSC). Mr. Daya Devadoss joining hand with Dr. Rajamanickam is the only mining lessee in Periathalai of Padugapattu village. He is the person who attack the fisherman people during 1995 by using country bombs. You can verify the same from Thattamadam Police Station record. From the above it is very clear that the article by Mr. Ilangavan Rajasekaran is paid article All the issues raised by your reporter are ill motivated.

Your reporter has mentioned that due to beach sand mining, the entire village is facing drinking water problem. It is really pity on your reporter, who is not knowing above the town “Kovilpatti” which is very famous for the film “Thanneer Thanneer” is directed by the veterian Mr.K.Balachandar. The town “Kovilpatti” is whether coastal village (or) whether beach sand mining is being carried out. Several reasons are imputed for drinking water shortage and ground water depletion. Such false publication of false and baseless reports were reported by your reporter only to cause irreparable damage to the beach mineral industries and embracement to the Court and the state Govt. to prejudice the judiciary as well as Government Officials.

Another howlers reported by your reporter is that the beach sand mining is going on despite a ban and is still going on the beach of three coastal districts. This is yet another false report. The mining activity all over Tamil Nadu has been stopped on account of an order of the State Govt. Can your reporter prove this allegation? If we prove will the management be prepared to sack the reporter from service? Your reporter has stated that Periathalai fishermen impounded a lorry that transported sand to Tuticorin. This case is nothing to do with beach sand mining and totally different case.

Is it article worthy of publication in your Reputed Magazine when your reporter has stated without any proof or report of one person among lakhs of villagers living in those areas has been affected on account of beach sand mining? We make a fervent appeal not to publication such unverified reports made with evil design in the mind of your reporter.

Sir, kindly depute a team of fair minded reporters of your magazine either from other states or other northern regions to visit the coastal areas in Tirunelveli, Thoothukudi and Kanyakumari districts to study for themselves about the prevailing ground reality and truth. Let the team conduct interviews with the local villagers and gather first hand information. Let them also take video recordings or photographs of the areas. After perusal of their independent unbiased report, your management will come to know the truth and come to your own realization that all the earlier reports of your reporter are false and nothing but false.

Your reporter has made a mention about Rs.30,000 crore loss of revenue. It is not known who has computed this loss and on what basis such evaluation has been made. Is there any proof submitted to your reporter by the complainant? As a matter of fact unprecedented scandal of massive scale of clandestine mining of Garnet sand in various river basins of Trichirapalli district has been perpetrated only by a company called M/s.Indian Garnet Sand Company and M/s. Southern Enterprises which are associated with Mr.Victor Rajamanickam and his accomplices. This mega scandal was brought to light by one Ex.MLA. The District Collector has estimated a total quantity of 39 Lakhs tonnes of Garnet sand illicitly mined by the above said company and the computation of loss consequent on such illicit mining is being worked by the District Collector. Against the action of the District Collector the parties filed writ petition in the Honourable High Court at Chennai which was dismissed, against which the SLP was filed by the parties in the Honourable Supreme Court which has also been dismissed on 2-2-2015. This is the honesty and integrity of such persons who are instrumental in spreading false rumours against their business competitors so as to with a view to eliminating them from this field. Such mega scale illegal mining of Mr.Dayadevadas did not bring to light by the medias or this gentleman reporter. All the documents are available in the blogs of www.beachminerals.org . You can find out the same.

Myself wrote all the medias including Frontline reporter about the mega educational decoit and violations by SRM Group of institutions. All the documents are available in our website www.pmaed.org . The above said news has not been published by this gentleman or your magazine, though all the evidences are enclosed in the document form. But without documentary evidence, this gentleman publish this news to convince the money payers.

If you visit www.beachminerals.org website, you can find out reports of State and Central Govt., officials joint inspection report submitted after verifying all the documents which established that this allegation is false. You can find out this, in 5th para reply of report dated 08.05.2013 available in http://www.beachminerals.org/wild-allegations-leveled-v-v-mineral-v-sundaram-ias-foundwrong-motive-envy-vindictive-far-away-truth/ . This can be verified from Ministry of Mines in New Delhi.

If your news paper really follows the real journalistic ethics and decency, will you please publish this reply also in your print as well as digital media, so that people at large will come to know the truth now made in proper perspective.

Your reporter Mr. Ilangovan Rajasekaran has further stated that a former District Collector of Thoothukudi Mr.Asish Kumar has reported about illicit mining of beach sand minerals. This particular District Collector had prepared his false reports after obtaining illegal gratification from persons who are inimical to some of the reputed beach sand minerals mining operators after getting transfer order to him by manipulating the government records. A complaint has also been lodged against Mr.Asish Kumar, the contents of which are appended herewith in the website http://www.beachminerals.org/complaint-ashish-kumar-ias-making-false-report-v-v-mineral-part/.

Similarly a complaint has also been lodged against Mr.Victor Rajamanickam. These facts of the complaints can be verified from the concerned offices and the website http://www.beachminerals.org/abuse-misuse-position-retired-s-officers-mr-v-sundaram-mr-m-g-devasagayam-tojwards-aiding-abetting-one-mr-dhayadevadas-misdeed/ and http://www.coastalenvironment.org/blog/misappropriation-of-govt-money-with-the-help-of-one-dr-samathanam-a-scientist-who-is-working-in-ministry-of-science-and-technology-by-one-mr-victor-raja-manikam-retd-professor-in-collusion-with-d/

You can find out a video in www.beachminerals.org which will also establish the nexus.

Already the same gang engaged one reporter name Sandhya Ravisankar and publish a false news in the name of “Illegal beach sand mining of minerals in Tamil Nadu may be a scam worth Rs 1 lakh crore”.

After our complaint and objection, the management found that, it is false and they themselves publish clarification on 24.05.2015 which is given below. 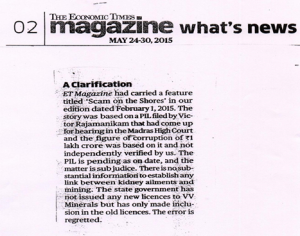 Such type of clarification has to be published by your goodself also.

Alternatively, you can invite your reporter to produce the documents to establish the above said contents in our presence. So that we will establish by documentary evidence, that these all ill motivated and pre-planned news only to prejudice the court and government.

Kindly publish the objection in your print as well as digital media.